Showing posts from April, 2011
Show all

A load of daftness and Rammstein's Richard Kruspe having a fag on his tod in NYC!

Too much sex makes you look like this? I'd better take a break. Life is great when you're having (great) sex. Or any sex at all. But it also means that the former becomes extra busy because of the latter - all of a sudden, all you can think of when you're going to have your next 'fix' while everything else, falls by the wayside. Which reminds me - I ought to have my favourite Victoria's Secret pair of knickers tattooed on my crotch instead.  So IB and I have been hanging out too much (eeek!), going out to dinner and to the cinema (like most normal couples doing cheesy shit) etc...yawn. And in one of those boring times when we decided to get out of the house, we got to watch a lame film at the cinema - Hanna - the story of this girl trained by her special agent father who goes on to become a special...whatever. Aside from a bunch of breath-taking chasing scenes, the plot is ridiculous and I was left with the feeling that the morons who commissioned th
2 comments
Read more

'Free Tibet...fuck China' tshirts from the 'Wink for Freedom' line - you need one! 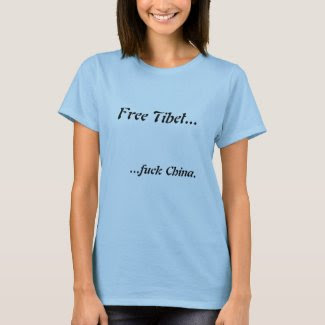 Going through Customs in China has never been more fun. Wink for Freedom line by Abeeinthenorthernsky Join one of the biggest clothing affiliate programs Simple but effective. Miss Pee
Post a Comment
Read more

Preview of piss - catching up on fuckall 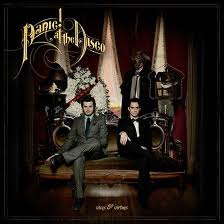 Time flies when you're having sex. I spent five evenings with Intense Boy this week and this morning, I told him that I need a break this week...so anyway, I am behind on a few things...including reviews of the new Panic! At The Disco album, 'Vices and Virtues' as well as LA retro rockers the Glory Stompers, Chicago based elecro indie ensemble Kid Savant and shit movie of the year - 'Hanna'. I know, I was shocked, too about my disappointment since the trailer was so compelling. Panic! At The Disco's new album - 'Vices and Virtues'. Buy it, for fuck's sake. It's awesome and later on this week, I will explain why. The Glory Stompers' vocalist staples dollar bils on his chest. Shame he cannot wait for us girls to stick them onto it. Kid Savant's boys - yummy. Especially the drummer.  We need more female heroines out there. This film needed a good script. Fuckers. Plus, fun Fairy Friday party with Denise & Co last week... Shi
Post a Comment
Read more
More posts