Showing posts from September, 2012
Show all

Joel McIver on The Rock Show about his new Machine Head book... 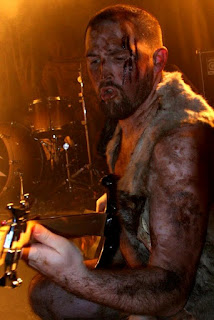 Back in 2007, Snorre A. Hovdal used to dress up (or down) as a caveman and beat his bass strings with a club. On and off stage. Snorre Hovdal in his Homo non-Erectus days with Trondheim-based band, GOAT THE HEAD . With his band of Neanderthals, GOAT THE HEAD , he even dragged his limbs over the legendary Abbey Road crossing in London. The shoot was featured in UK-based Metal Hammer in conjunction with the magazine's 'Get In The Ring' (live) competition. GOAT THE HEAD stop the traffic on the legendary Abbey Road zebra crossing in London in 2007 (Hovdal is third from left)... This month, however, Hovdal has entered a contest to direct a video for Icelandic biatches, Sigur rôs . It features his own grandma, it has emotive narrative and it is currently in the Top 25 of the most voted and watched videos entered in the contest. Watch it here and you'll be compelled to vote for his video to win the contest. Sigur rôs - REMBIHNÛTUR (Video contest contribu
Post a Comment
Read more
More posts