Showing posts from May, 2013
Show all

Back in NYC, GHOST let their hair down & keep their masks on at the aftershow! 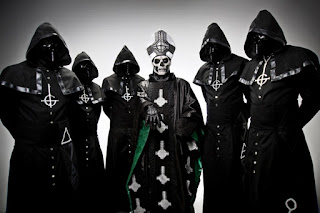 I wish to start with a disclaimer about Saturday night's satanic antics. I am unsure as to whether my memory will serve me well. GHOST - bunch of pretty boys I woke up on Friday, May 10th and went online to check whether I could buy a ticket to see GHOST. Granted, it was last minute since the band was supposed to play the following day. But I did not expect their Webster Hall show to be sold out. Last time they were in New York was in April of last year when they opened for Opeth and Mastodon at Roseland (3200 cap) but still...selling out a 1500-cap venue, after their previous headline show had been at The Studio (300 cap) 16 months prior, meant that something quite magic, aside their lucrative record deal, was happening around those nameless, faceless ghouls from Sweden. GHOST - new merch, new frontiers Luckily, I managed to get squeezed onto the venue's guest list on the night, thanks to DD-Poo (in line with the rest of the blog, people's true identities are r
Post a Comment
Read more
More posts