Showing posts from August, 2013
Show all

Rockstar Mayhem tour date in New Jersey, Gunfire-N-Sodomy and a hint of Ghost... 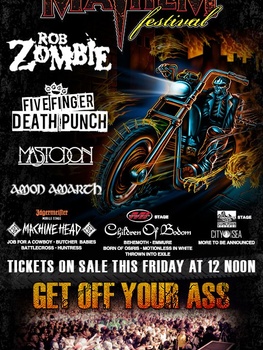 The New Jersey's date of the Rockstar Mayhem tour happened to be unbearably hot. It was scorching. Pretty much everyone I came in contact with, aside a tree under which I spent most of the day, was complaining about the soaring temperatures. Rockstar Mayhem tour official poster...  I was sober most of the day, on Rockstar water - which is not a euphemism for drinking from the  backstage taps. Rockstar have turned into more than a just a different type of Red Bull these days. Yawn. My sobriety ended when I attended the Mastodon party after watching the Rob Zombie set on the main stage. Thanks to one of the guys in the Amon Amarth crew, I got to board the bearded Swedes' Viking ship a few minutes before their performance on the main stage and took a pic of Denise who just did not want to step off of it. Sweden has its allure for some... Denise aboard the Amon Amarth Viking ship a few minutes before the band's performance... Amon Amarth on stage...  First of
Post a Comment
Read more
More posts