Showing posts from March, 2019
Show all

One Nation and the NRA caught with their pants down - should journalists continue to expose these massacre lobbyists?

- March 31, 2019
The answer is YES. The media needs to continue to work using whatever methods necessary to get to the truth. Whatever methods are ethical and moral, that is. Unlike James O'Keefe's Project Veritas which presents itself as a bastion of reality, but is a sensationalist cesspool of badly edited (s)hit pieces. Anyway, here's the article on the One Nation / NRA investigation care of Al Jazeera . Mrs PP
Post a Comment
Read more

- March 31, 2019
Who would have though? The Vermont Senator's tax returns have become as hot as Trump's these days with both sides getting their knickers in a twist over the fact that he has not released them. And with 'both sides' I mean Republicans and Democrats (here is a bipartisan consensus if we wanted one!). On  Face The Nation  earlier today, Sen. Sanders promised he would be releasing them soon. Good, I am glad. Mainly, cos it's important for me to know that transparency is still Bernie's main trait.  Just as a sideline, he's always been the poorest member of Congress and I doubt things have changed that much, even with those couple of books he has put out since he ran in 2015. And not because I value poverty over financial success. On the contrary, I don't know anyone that would prefer being poor if they had a fair chance at amassing  wealth. Literally, myself included. But it is because amassing wealth for the sake of it (like a great chunk of the 1% and l
Post a Comment
Read more

Beto O'Rourke, Kamala Harris & Co - who are their supporters?

- March 31, 2019
Look, this can only happen when you don't have ENOUGH people supporting you. And if that is the case, are your reasons to be president fair and moral? To me, they aren't as you're cheating in order to win a game. Face it - you're addicted to power. And to those who are enamoured with these candidates, I ask:"How different are you from the Trump voter who is dazzled by their idea of what is 'presidential'?" Unless you are the 1%, don't be duped by these polished puppets. This New York Times article puts it into great perspective. Senator Cory Booker hangs out with high tech titans and wealthy venture capitalists including investor, Ron Conway in San Francisco. Senator Kirsten Gillibrand hands out at a fund-raiser at vice chairman of the investment giant, BlackRock, Matthew Mallow's house on the Upper West Side of Manhattan. Kamala Harris mingles with Hollywood luminaries at the home of the president of the MGM Motion Picture Group, Jonathan Gli
Post a Comment
Read more

Busy with College, work, family, theatre and background work, and now...Bernie is back! 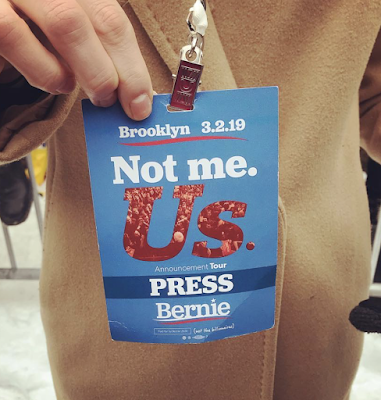 Things are going to get busier with Bernie Sanders back in the race. But if anything, there is a section of the population that holds a beacon of hope for decency, generosity and fairness to make a comeback in politics. #NotMeUs Brooke holds her press pass... Yesterday's rally in Brooklyn College was attended by over 13,000 supporters. I was asked to volunteer, but I could not get to the heart of Brooklyn by 8am (too much College work these days). I went over to meet up with Jessie in Williamsburg, finally saw her little angel face, Astro (Frenchie scrunch face) and then we headed over to the rally in a Car2Go! Fantastic invention. Bernie is still pissed cos the struggle continues... There, we met Hector, then Arlene (UWS MoveOn activist with whom I'd campaigned for both Bernie and Zephyr Teachout in Manhattan) and a friend of hers joined us in line. Walking into the outside venue was like going to a high school reunion. Here's a video of me, Jessie and Hec
Post a Comment
Read more
More posts