Here are some excerpts from Patrizia's video journalistic portfolio.

WHERE IS GOD? HOVE FESTIVAL, NRK, 2008
TINITUS producer and special correspondent, Patrizia (Mazzuoccolo) Pelgrift walked around the festival audience looking for God. Once she found him / her, she expelled him / her.

MUSIC IS MY RELIGION, 'LYDVERKET', NRK (2008)
Vocalist, Brendon Urie and guitarist, Ryan Ross of PANIC! AT THE DISCO discuss with Patrizia whether religion is an important ingredient of their professional, every day life.


HAVE YOU SEEN THIS FACE? PANIC! AT THE DISCO - Hove festival, NRK, 2008
Patrizia chats with some of the band's very young fans prior to their headline show at the Hove Festival and finds out that some of them will be hanging out with the band backstage by the beach after their performance...

Brendon and Ryan from PANIC! AT THE DISCO discuss how close their really are to Pete Wentz from FALL OUT BOY. Patrizia does a master eye roll.

'THE MAN WHO SHOULD HAVE BEEN PRESIDENT' documentary, 2015-2016
Patrizia follows a handful of Bernie Sanders grassroots activists during the Democratic primary in New York City. After Hillary Clinton clenches the nomination, the activists disperse into different factions - in the general elections, some of them vote for Hillary Clinton, some for Jill Stein and some for Gary Johnson. Shot, edited and produced by Patrizia Pelgrift.

'A GREAT LIGHT', 2016
Classical conductor, Douglas Sheldon tells the story behind Pope Francis's in New York City in 2015 and how it inspired this piece of music (composed by Martin Sedek and arranged by Douglas Sheldon and Martin Sedek). Shot by Jeremy Kaplan. Edited and produced by Patrizia Pelgrift.

Popular posts from this blog

With an eye over to Christmas and one back to the rest of 2019, I cannot believe I got this far this year. Three semesters in college, accrued 36 credits in one year and I should soon find out if this autumn semester was also a festival of As. Summer was spent attending an intensive maths remedial class, four days a week, no credits...it was a slog. My husband could not believe I'd do it that way instead of taking a 4-credit maths class during the semester. No, I am strategic. It's all about keeping that GPA clean. So, final overall result for maths: B+ (85%). Maths is like going on a bike -- you either keep that brain supple constantly supplying it with cubic equations, variables or tracing those (-8, -2) cartesian coordinates or it will forget how to apply its logic. I used to think I was shit at maths. I was just out of practice. Starting the real path to a different future. I'm diving into Philosophy from spring. That's going to be my major. And either Theater A
Read more

One Nation and the NRA caught with their pants down - should journalists continue to expose these massacre lobbyists?

The answer is YES. The media needs to continue to work using whatever methods necessary to get to the truth. Whatever methods are ethical and moral, that is. Unlike James O'Keefe's Project Veritas which presents itself as a bastion of reality, but is a sensationalist cesspool of badly edited (s)hit pieces. Anyway, here's the article on the One Nation / NRA investigation care of Al Jazeera . Mrs PP
Read more 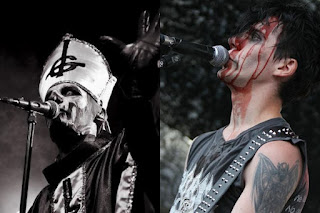 After the show, I went backstage with Denise and opposite the Masto dressing rooms, on the other side of the corridor, I met some Swedes that could have been members of Ghost (or they might not). One of them was half Italian and half Swedish. We spoke Italian but he refused to confirm what instrument he played in the band. Or he could have been a roadie. Love the whole mystery that surrounds Ghost. And it must be fun for them, too. They make fun of people that try to discover who they are. Like this Biatch. Take baby-faced Aksel for example. He was curious to know what their show was like - 'Well, the whole sinister papal gimmick could look a bit cheesy,' I offered. 'But it actually came across suggestive. Loved the atmosphere...' I mistook him for the singer at first and the little rascal went along with it. But again, he could have been a friend of the band on holiday in the US...right? The whole anonymity claimed by the Ghost gimmick is like the Jante Law gone
Read more