Showing posts with the label James Comey
Show all 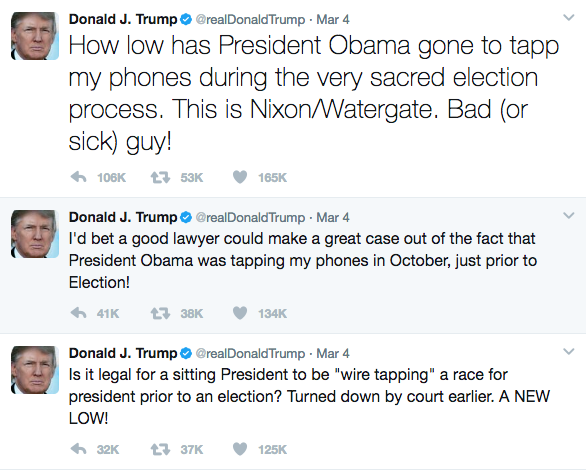 FBI Director, James Comey and NSA Director, Mike Rogers recently confirmed in the current Congressional Hearing that President Trump's claims about Obama wire-tapping Trump Tower in three different 'tweets' were unfounded. This is so embarrassing on so many levels, least of them - they were communicated publicly on Twitter. And now, what?! On a different topic, that of 'leaks', I'd have to say that Congressman Trey Gowdy is barking up the wrong tree. The 'leaks' against Michael Flynn may have not been strictly following legal guidelines, however, they were in the public interest and he was fired by President Trump. So...whatever. Can't wait to hear what can be done about the President's lies in connection with the previous President. Mrs PP
Post a Comment
Read more If you missed this earlier this morning, here is the full speech by FBI Director, James Comey about his investigation into Hillary Clinton's personal server and the handling of highly confidential information while she was Secretary of State.  FBI Director, James Comey - a solid man. For the purpose of clarity, the comments in brackets are my own. I will be doing my best to draw parallels between the topic of this speech and 'taking a poo in public'.  That might be the only way you'll truly understand how Hillary Clinton is current feeling as she is landing in North Carolina (on Air Force One, accompanied by President, Barack Obama).  Democratic 'presumptive' nominee, Hillary Clinton: shit happens So, here's the speech in its entirety:  "Good morning. I’m here to give you an update on the FBI’s investigation of Secretary Clinton’s use of a personal e-mail system during her time as Secretary of State. After a tremendous amount of work
Post a Comment
Read more
More posts