Showing posts with the label Julian Assange
Show all

Whose side is Julian fucking Assange on these days?! 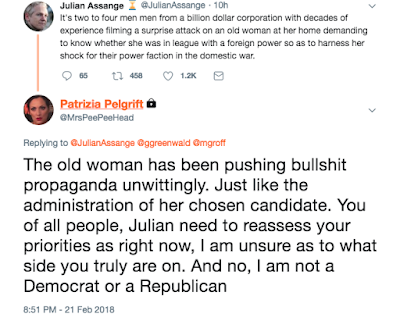 He established Wikileaks and became a hero for some of us. After the 2016 elections, however, it has been hard to understand his motivations.  After Glenn Greenwald (another one who is going off on his own tangent these days and I am finding it hard to accept his positions on the current administration) tweeted about CNN harassing an old woman who was the admin of a Trump supporting group on Facebook, Julian Assange chimed in.  This is the angle from the Alex Jones's show, Infowars stance on the same story . And I fucking lost it. I trust Greenwald and I used to trust Assange's judgments. I do not want to be associated or have anything to do with Alex Jones.  Fuck you, Julian Assange. Fuck these people. I'd love to meet Greenwald to ask him directly. Or next time I bump into Jeremy Scahill again, I'll have a question ready for him. But Julian Assange? Releasing the DNC emails on the first day of the Democratic Convention?! Not before??? Whe
Post a Comment
Read more
More posts