Showing posts with the label Martin O'Malley
Show all 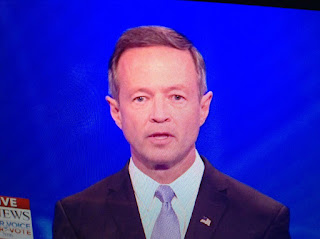 The excitement about the third Democratic debate stayed constant throughout the night. Even during most of Hillary Clinton's responses. Or Martin O'Malley's unashamed self-promotion while Bernie Sanders and Hillary Clinton were, as he called it, 'bickering' gun control, Sometime, O'Malley comes across as poised, inspiring and quite insightful in his statements. Most times, however, he appears as if he badly needs to pander to whatever topic is hot in the news to feel relevant. He is the Democratic equivalent to Ted Cruz, a man whose speeches look and sound like auditions for roles on General Hospital (that's still going, right?) - albeit, he comes across desperate, like he is trying too hard. Last night, however, I was mesmerized by O'Malley's ears. Never before had I noticed that they were so sharp as to make him look like a Vulkan. Martin O'Malley (Mrs Pee Pee Images) Hillary Clinton acted with great class and delivered some great voc
Post a Comment
Read more
More posts