Showing posts with the label Peter J Gleason
Show all 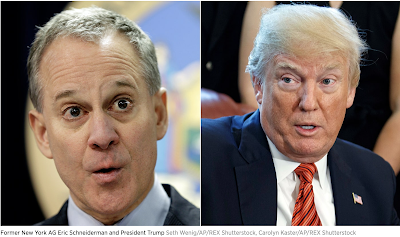 Donald Trump and Eric Schneiderman have had a tense relationship for a long time. Years. A new story has broken out in the media about two women having been 'sexually victimized ' by the ex Attorney General. Their stories date back to 2012-2013 when their lawyer, Peter J Gleason thought it would be a good idea to convey his clients' vicissitudes to Donald Trump's lawyer, Michael Cohen  back then. And this is where things become murky. What were Gleason's intentions to pass on this information to Cohen for Donald Trump? It does not sound like this man gives a fuck about the #metoo movement.  According to this article , Peter Gleason swings 'right'. Sure, I have no evidence of Gleason's party affiliation as such, but I am 'deducing' it because of the photograph of him next to Sara Palin which features the caption 'Backstage with my old friend from Alaska, Sarah Palin.' No member of the Dem Party would describe Palin as a friend, surely
Post a Comment
Read more
More posts