Showing posts with the label The Late Late Show
Show all

James Corden - how far can a candy bar thief go? 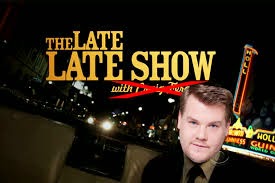 So, when I chose to watch the show in order to find extra ammunition to mock it, I ended up feeling like a bit of a knob myself as I was swept up by the party atmosphere provided by the Reggie Watts & Co band and by the amiable enthusiasm of host, James Corden himself.

I don't know about you, but I only watched Craig Ferguson twice. The first time 'cos I was curious. The second time 'cos I was trying to get rid of the first night's dreadful feeling of loneliness. The one you get from watching some man host a show from an office corridor. The reason I did not tune in a third time was because I could not shake that feeling off.

So, spunky new band and host might win the race here. Unless Corden gets all Upper East Side girlie sensitive again like in this exchange with Patrick Stewart, he's got my vote.